Funny isn’t it? Life, I mean. Things turn around so fast. Last night I completed a layout for my All About Me album (which is very thin, I might add), all about before I was a mother. Part of the journaling says that I think I am a good Mum…. well today I think I am a crap Mum. This week has been so hard and I know I am being hard on myself, but things just aren’t falling together today.

Christopher has well and truly hit being a four year old (and only two weeks into his new year). He is really trying me on. He has always been a bit tricky, but the blatent disregard for everything I say nearly got him run over by a car this morning. To be fair, we weren’t doing anything wrong, just crossing at the lights of an intersection. Chris ran ahead and I repeatedly said to STOP, but he ignored. Then a crazy driver (who must have been letting his Guide Dog take the wheel) decided to turn into us. So I yelled at Christopher! What is that all about?? Obviously he should have been listening (and wasn’t), but it wasn’t really his fault either.

Maybe I just need some more sleep. Or a cup of honey-filled tea to sooth my throat – I feel like I’ve been yelling all day and I hate yelling at my babies…. I do almost anything to avoid it!

I have to admit I feel better after taking this little break to blog. They kids are playing nicely and giggling sweetly… they’re the moments that make the others seem less hard to deal with. Here’s that layout, anyway… 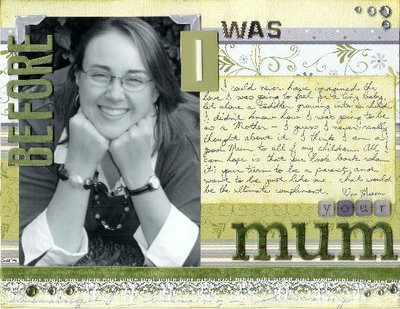