Sunday was Christopher’s fourth birthday. I can’t believe he is four already. Amelia turns five on Tuesday, so I have two four year olds for two days!! (Plus a 22 month old, of course.) 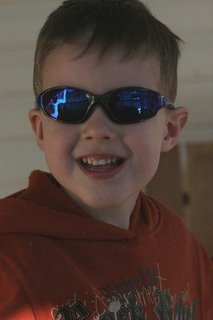 He had a major dinosaur day. He loves dinosaurs, but has never really had any. He saw a boy on “Collectors” (ABC Friday nights at 8pm) who collects dinosaurs and decided he’d like a few more dinosaurs. Boy, did he get dinosaurs!! Little ones, big ones, ones you put together, even two that hatch out of eggs in a volcano thing (very messy, smelly and gross). I made a dinosaur cake and all four of his grandparents visited in the afternoon. 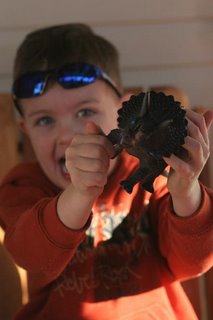 Christopher is still very funny about birthdays. I don’t understand why, but he doesn’t like the attention and gets very upset when we sing Happy Birthday to him. This year, we lit the candles (which was very hard as it was windy) and went to sing to him and he was off like a shot! He just ran! It took a while to convince him to come back to the table to blow the (relit) candles out. Funny little man. So here is my favourite photo from the day…. 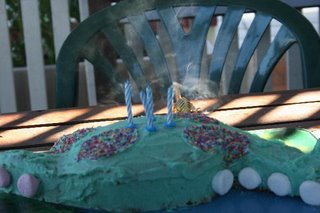 ….Christopher had just bolted, then the wind blew out the candles! LOL – I wonder if he’ll ever like his birthday!